A taste of the “Great Ocean Lifestyle”

now available nationally through Being magazine

“We’re encouraging readers to transition from a place of doing to a state of being,” said Ally McManus, the founding editor of Being magazine, who conceived, edited and produced the publication from her home office in Ocean Grove on the Bellarine Peninsula.

Inspired by the natural landscape surrounding her, Ally commissioned stories for the first issue of Being on the wellbeing benefits of connecting with water, as well as the grounding nature of forest bathing. “There is so much wisdom for us to tap into in the natural world and this magazine is an organic, embodied expression of that connection and relationship with nature,” explained Ally.

Beautifully packaged in a format that delivers intentional reading and mindful pauses in equal doses, Being contains short, easy-to-digest content focussed on cultivating balance, ease and calm in life. This is all delivered with real-world pragmatism as the writers of Being walk the talk – the working girl can read Being and feel inspired to live well, yet still feel understood in the trials and tribulations of everyday life.

Being speaks to its reader like a caring friend. The writing is direct, kind, nurturing, down to earth and practical. Each page is as inspiring as it is informative. 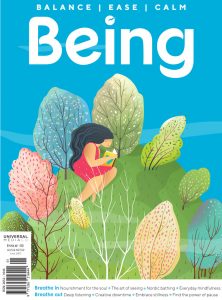 Ally McManus is just “being”

Founding Editor Ally McManus developed Being from her home office near the Great Ocean Road in Southern Victoria. Ally’s day-to-day life is a practice of mindfulness; each day includes yoga, meditation and a conscious engagement with all around her. “The notion of ‘being’ that we’re exploring in this new magazine is not a destination that you arrive at. It is a compilation of the feelings you experience throughout your journey in life. It’s a process,” said Ally.

Target Audience for Being

The primary target audience for Being is young women aged in their 20s and 30s. This is a community of people who are coming of age, making mistakes, getting up and doing it all over again. Being invites this community to do so with the confidence, joy and compassion that comes from knowing that just “being” is enough.

Together with Wild magazine, Being is the second launch for Universal Media Co in as many months, and the second within the new category that the company is developing called “Mindful Media”, which includes WellBeing and Wild.

Want to spend some time just being?

For on-air giveaway copies or review copies, contact Srashti Singh before December 20th on (02) 9887 0354, or ssingh@umco.com.au and we will arrange shipment.

If you wish to do on-air interviews, we would love to hear from you! Please line up a time in advance due to the holiday period.

We know the post can be a little slow at this time of year, so we have loaded digital copies of Being to the App Store, Zinio, Magster, Flipster and many more to go live on December 19, plus we have a sample preview copy on ISSUU via the URL below: